Strategically located, our campsite is within easy reach of all major tourist destinations to which we organise tours and cultural trips.

Strategically located, our campsite is within easy reach of all major tourist destinations to which we organise tours and cultural trips.

Staying at a campsite in Verona allows easy access to all the area’s major cities.

You can visit the main tourist attractions, monuments and historical symbols. Here are some cities that you should visit

A visit to Verona is a romantic stroll into the past: the fortified stone walls of the city contain traces of its rich and magnificent Roman origins.

Here you can see the unique medieval signs in the oldest streets and the glories of the past when the Scaligeri family dominated the city.

The famous “Arena” amphitheatre is the symbol of the city. Built in the first century AD it has an elliptical layout for excellent acoustics and seating capacity. Then there are the beautiful Roman theatre and Ponte Pietra, a big bridge built on the Adige as a ford for the early inhabitants.

Castelvecchio, the Scaligero bridge and the Cangrande palace are inheritances of the Scala family. In the Venetian period too the aristocracy left their mark on buildings and churches. William Shakespeare made Verona famous with the most romantic love story of all the time “Romeo and Juliet". The Capulet house, better known as Juliet’s House, built in the 13th century, is one of the most popular tourist attractions. Today the Arena is a magnificent setting for quality theatre programmes, opera and concerts –for more information in detail: www.arena.it 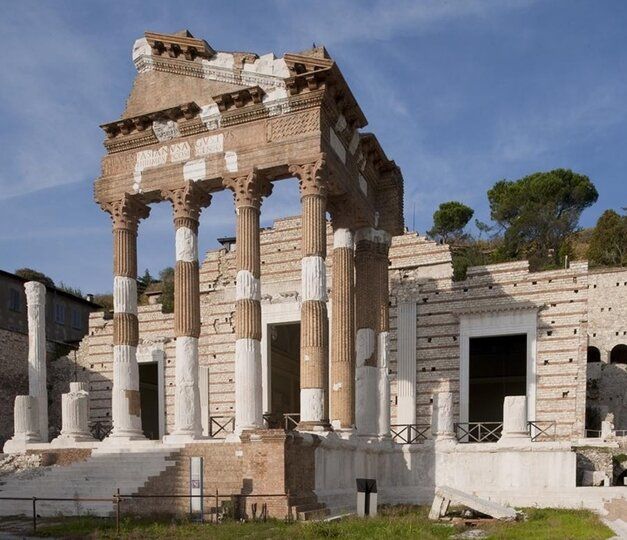 The west coast of Lake Garda is in the province of the city of Brescia, a lovely place, known for its flourishing industrial activity and its prestigious centre.

From the ancient Roman Brixia you can admire the beautiful Capitolium, built around 74AD. Some archaeological relics are on display in the museum of Santa Giulia inside the monastery, symbol of Lombard history (along with the Church of San Salvatore, built in the 8th century and the Medieval Church of Santa Maria in Solario), declared a UNESCO world heritage site in June 2011.

The museum displays artefacts from the Celtic, Roman, Lombard, and city-state periods, down to the Venetian domination. The medieval Piazza Paolo VI contains the Duomo Vecchio or Rotonda, an example of a Romanesque circular church, and the Palazzo del Borletto, home to the town’s courts in the Middle Ages. In the Renaissance Piazza delle Loggia, dating back to the Venetian domination, you can admire Palazzo Loggia, Monti di Pietà and the symbol of the city: Torre dell’Orologio with “Macc dè lé ure”(the hourly dafties) is a clock tower where two statues strike the hour on a bronze bell. The Castello, fortified by great bastions and now a Renaissance and weapons museum, dominates the city. Don’t forget the Pinacoteca Tosio Martinengo. 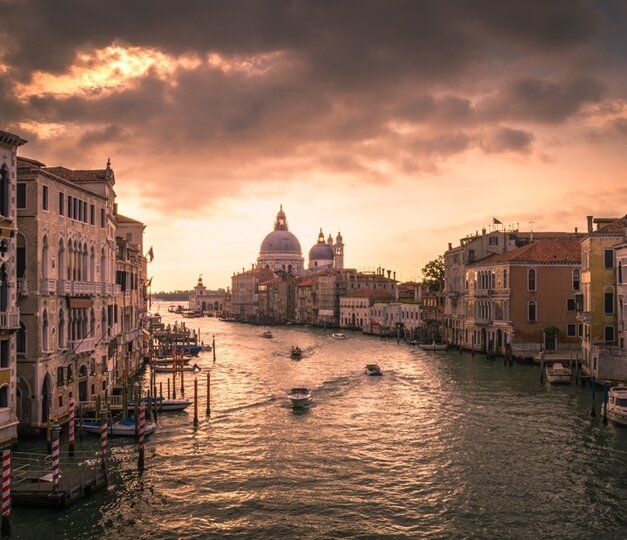 Venice, the most beautiful city in the world

The world-famous city of Venice owes its charm to its special relationship with water. It nestles in the lagoon of the same name made up of 118 small islands. The city is crisscrossed by a large number of ship canals linked by bridges.

Venice is divided into six “sestieri” or districts with a succession of narrow and labyrinthine pavements. St Mark's Square, famous for the Basilica of San Marco, the Campanile and the Palazzo Ducale, encapsulate more than fifteen centuries of history and art. The Grand Canal, a great ship canal, affords a unique view of the facades of the most beautiful buildings. You should take a look at the Chiesa dei Frari and the grand school of San Rocco, replete with the works of Tintoretto.

Art lovers will undoubtedly visit the Gallerie dell'Accademia, a real temple to the great Venetian painters, and the Peggy Guggenheim Collection, an international reference for contemporary art. The islands of San Giorgio and Giudecca are very evocative. 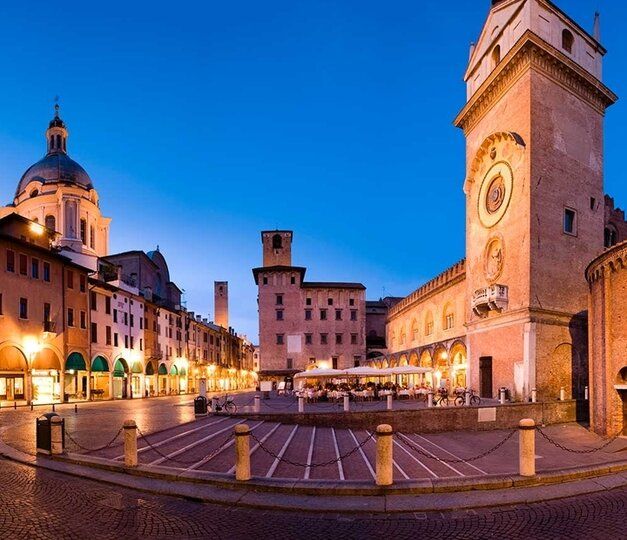 Mantua, the city in the middle of the lakes

To the south of Lake Garda, we find the ancient city of Mantua, situated in Mincio Park. Originally it was an Etruscan town, then later Roman, and it survived several occupations up to the Middle Ages.

The most famous monuments date back to the so-called age of the city-states and the period when it flourished under the Gonzaga family, who transformed Mantua in one of the great centres of the Italian and European Renaissance. We recommend the Palazzo Ducale, full of galleries, courtyards and hanging gardens. Here you can admire the 15th century “Camera Picta”, painted by Mantegna.

Piazza Sordello is the heart of the city, with the Cathedral of San Pietro, an original mix of neoclassical, gothic and Romanesque architecture. Anyone who enjoys cultural tours will certainly appreciate Piazza Borletto, Piazza delle Erbe, Palazzo della Ragione, Torre dell'orologio, Casa del Mercante and Palazzo Te, a great work by the painter and architect Giulio Romano. Mantua is also famous as the birthplace of Virgil and the setting of Verdi’s opera “Rigoletto”. The surrounding area offers three lakes fed by the Mincio river (flowing out from Lake Garda), and canals, which makes for an unusual landscape. 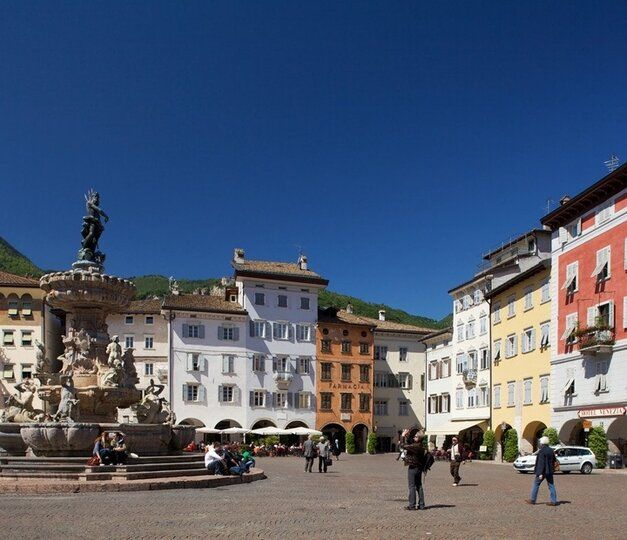 Trento, nature and tradition at the foot of the Dolomites

Trento is a city in the heart of the valley of the Adige, a river that flows from the Venosta Valley through the towns of Bolzano, Trento, Verona and Rovigo before emptying into the Adriatic Sea.

Trento and Bolzano are the last cities before the Austrian border. This is why, over time, it has grown in importance both commercially but also in industrial and tourist terms.

Trento has always been a major local economic centre. Evidence of its importance includes the many castles in the area and the palaces that form the old city centre. Over the years, the city has promoted the surrounding area of which it is the provincial capital. The district includes some of the most beautiful natural sites, such as the Brente Dolomites, San Martino di Castrozza, Val di Fassa, the Sarca Valley and the north of Lake Garda. 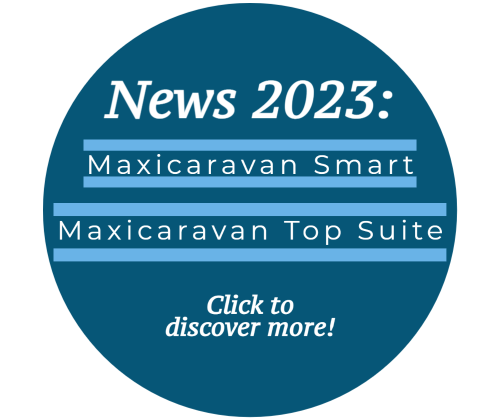